MAY 31: World No Tobacco Day: Protect Our Youth 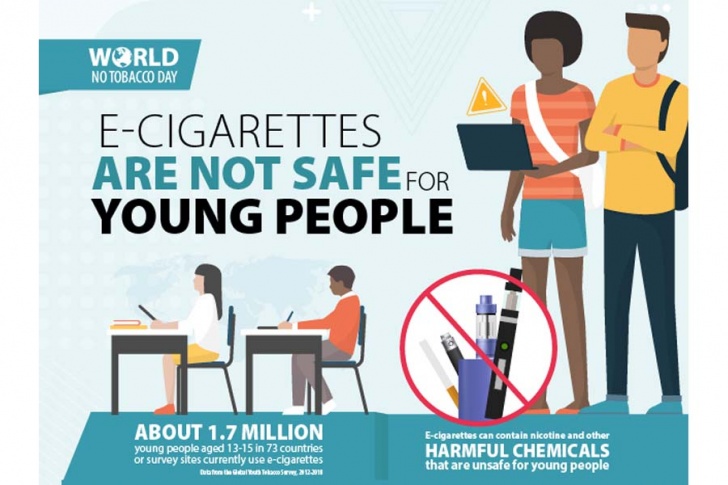 World No Tobacco Day (May 31) has been celebrated since 1988. According to the Centers for Disease Control (CDC), this year’s focus is on “preventing youth tobacco product use and the tobacco industry’s attempts to attract youth”. Of course, these efforts are also applicable to use of tobacco by people of all ages. The CDC reports that “Tobacco companies, meanwhile, spend billions of dollars every year on marketing tobacco products, including cigarettes, cigars, e-cigarettes, and others.”

U.S.Youth and Tobacco: The Numbers

In 2019, about 40% of U.S. middle and high schoolers reported ever using any kind of tobacco product—including e-cigarettes—and 23% said they had used a tobacco product in the past 30 days.

Studies show that most adults in the United States who regularly use tobacco products started before the age of 18. Using any tobacco product, including e-cigarettes, is unsafe for young people. Tobacco products—including cigarettes, smokeless tobacco, and most e-cigarettes—contain nicotine, which is an addictive drug. Being exposed to nicotine can also harm brain development, which continues through the teen years and up to age 25. Exposure to nicotine during these important years can harm the parts of the brain that control attention, learning, mood, and impulse control.

The younger a person starts using tobacco products, the more likely they are to become dependent on nicotine. The tobacco industry uses this information to attract youth and young people to their products through ads and sponsorships in stores, online, in media, and at cultural events.

Studies in the U.S. and other countries have shown that the more ads for tobacco products a young person sees, the more likely they are to use tobacco products. The U.S. Surgeon General has also said that seeing people smoke in movies makes youth more likely to smoke. Although the number of movies rated PG-13 or lower that feature smoking has gone down in the past 15 years, the films that do show smoking show it more often.

The flavors in tobacco products, including e-cigarettes, make these products appealing to kids and teens. Since 2009, tobacco companies have not been allowed to sell cigarettes in flavors other than menthol in the U.S. Still, youth are more likely than adults to smoke menthol cigarettes. Flavoring is also a major driver of e-cigarette use among young people. More than 2 out of 3 youth who currently use e-cigarettes use flavored e-cigarettes, and flavors are a major reason they report starting to use e-cigarettes.

The Danger of E-Cigarettes for Youth

Since 2014, most U.S. youth who said they had ever used tobacco products reported using e-cigarettes, and the percentage has grown over time. E-cigarettes typically contain nicotine, and newer e-cigarettes use a new form of it called nicotine salts, which make it easier to inhale higher levels of nicotine.
Because of the recent rise in e-cigarette use by US middle and high school students, CDC offers resources for parents teachers pdf icon, and healthcare providers to help them talk to kids about e-cigarettes.

(Posters for the parents, teachers, and healthcare providers are available for downloading from the cdc website listed below.)

What You Can Do

Parents and other caregivers can: